What were the last results of Card Factory ($CARD)?

On May 3rd, Card Factory published its annual report for FY 2022.

The revenue went up by 27.8% year-over-year, reaching GBP364.4 million. But, this is not a good comparison because last year, several stores were locked down due to the COVID-19.

Like-for-like sales, considering locked-downs, decreased by 3.9%, but it is achieving its pre-pandemic level in a year without restrictions.

Online sales went down, but they are still higher by 30% than before the pandemic. According to the Management, this is due to three factors:

The main message the Management sends is that despite the hard times of the retail closure, Card Factory has remained the leader in UK greeting cards sales. Its market share was reduced to 20% in 2020, but in 2021 it achieved 24%, and they expect to achieve its pre-pandemic level of 33% soon. 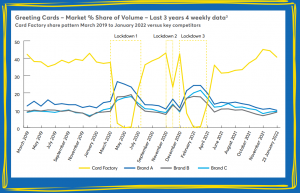 Below we can see the revenue distribution among the different channels. 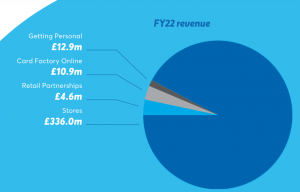 What is the primary Strategy of Card Factory ($CARD)?

What is the Outlook for Card Factory ($CARD)?

The Management has confirmed its expectations of returning to FY2020 results (GBP451.5 million in revenue, an increase of 24%).

What is the intrinsic value of Card Factory ($CARD)?

The intrinsic value will vary widely depending on how much growth we are willing to input in the calculation. If according to the Management, CARD returns to FY2020 results, we would be talking of GBP76 million of Operating Profit.

Considering the expected growth and history, we could expect a multiple of 15. So multiplying the forecasted Operating Profit by the multiple, removing the current net debt (GBP192.3 million), and dividing it by the number of shares (342.37 million), we would get a target price of GBp276.81 (almost four times the current market price).

Inditex: Back to normal

What were the last results of Inditex ($ITX)?

On June 8th, Inditex released its first-quarter results, where basically, they disclosed a significant rebound due to the increase in traffic in its stores.

In the report, first of all, they remind us of the three main strategic pillars that guide their operations:

Even being quite schematic at this point, I like that they refer to them. It helps clarify and emphasize the culture the management wants to impress in the organization.

During this quarter (from February 1st to April 30th), the revenue has grown by 36%, reaching €6.7 billion. The online business decreased by 6% year over year due to the high watermark achieved last year when it grew by 67%). They expect online revenue to increase further and surpass 30% of total sales by 2024.

In terms of geography, they highlight that the strong growth continues in the US (which is good news due to the size of this market) and that apart from the close of stores in Russia in Ukraine, 67 stores were locked down in China during this period. By the date of this release, only four remain closed.

What is the outlook for Inditex ($ITX)?

About the outlook, they now expect to come back to pre-pandemic growth. Currently, 90% of the 6,423 stores they own are open.

Concerning the next quarter, Spring/summer collections were well received during May and June with a growth of 17%.

What is the Capital Allocation of Inditex ($ITX)?

What is the Intrinsic Value of Inditex ($ITX)?

Given the financial history of Inditex, we cannot argue that we are talking about quality. Currently, according to TIKR, it has a Return of Capital of around 20%, but historically it was more frequently above 30%.

The big question is if they will be able to maintain their level of growth. They have increased their revenue at a compound annual average rate of around 10% from 2005.

Given the geographical spread that they currently have, it doesn’t seem easy to grow in that dimension. But we must consider the current growth in the online business and the possibility of widening their offer. Recently they introduced cosmetics and sports apparel in some of their shops, and these are only a couple of examples of the different products they could add to their successful model.

The role of the new CEO, Óscar García, is also a concern. Although after working in the company for years, we can expect similar direction and hopefully similar outcomes.

Looking at the organic traffic for zara.com estimated by Ahrefs, we can see that the number of searches that finish in the online store grows, not spectacularly but steadily.

What is Inditex ($ITX) doing in digitalization and sustainability?

Apart from the first strategic pillar, which is self-explanatory, building a platform that integrates physical stores with the online business, what is doing Inditex in the other two ones: digitalization and sustainability?

They don’t talk explicitly about digitalization, but on my last visit to the newest flagship shop in Madrid, I was able to see it in real life.

For example, below is a picture of some customers paying themselves directly for their purchased items and removing the safety tokens. 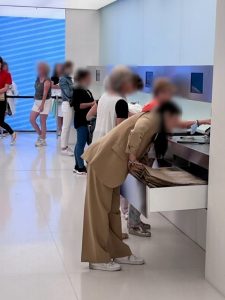 Apart from this feature, they could buy them online in advance and come to the shop to collect them on their own.

There were also QR labels where you could read with your cellular to see online the shop map and some additional info.

Finally, about sustainability, in the last results press release, they disclosed that apart from working on this subject with different start-ups, they have already committed to purchasing 30% of the production volume of Infinna, which recycles their fibers from used clothes.

There were also bins for dropping down used clothes in the new shop.

On June 2nd, Zumiez published its results for the 13 weeks ending on April 30th and held the correspondent conference call.

Results were in line with the guidance and with the results being reported for the rest of discretionary consumer businesses with significant exposure to the US. The sales were down 20.9% concerning the same period last year, and they incurred a net loss of minus $0.4 million.

The main reasons for the decrease in sales are the comparison with a period when consumers had more available cash due to the pandemic stimulus and the inflation, which restricts the amounts destined for Zumiez’s types of products.

In terms of capital allocation, Zumiez fully completed the repurchasing program. It bought back 1.9 million shares at an average cost of $43.51. There is no current authorization for more share purchases.

During the call, Rick Brooks, CEO of Zumiez, pointed out that if we skip the pandemic, they grew revenue at a cagr of 8% and EPS by 15% from 2011 to 2021. He expects to continue returning value to shareholders based on the strong brand and culture of the company. This quarter, despite the challenging conditions, it is remarkable that they could sell at full price, maintaining margins. It is also important to note that Zumiez carries a strong financial position with cash and equivalents of $173 million.

My take on Zumiez

It is important to note that the International segment, where they plan to open more shops this year, has grown 13% from last year. This means that, as they say, one of the main reasons is the US stimulus due to the pandemic, but also that its business model and products are being recognized in the international markets where they are operating. So we can expect that this growth can be sustainable there.

What is the intrinsic value of Zumiez?